Request a customized
Comparative Market Analysis of your area. 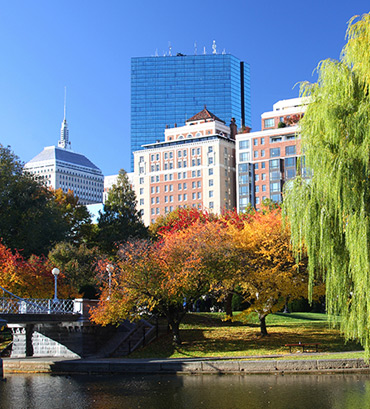 SOUTH END
Located just minutes from downtown and the Back Bay, in recent years the South End has become one of Boston's most popular neighborhoods. It has attracted a diverse blend of young professionals, families and a vibrant gay and lesbian population to this Boston Landmark District. You will be sure to notice the South End's renowned Victorian brownstone buildings and homes as you walk along Tremont Street, Columbus Avenue and Massachusetts Avenue. Small business owners also enjoy the amenities of the South End and are supported by the national award winning Washington Gateway Main Streets Program. Some of Boston's finest restaurants, a thriving arts community and nearly 30 parks also call the South End home.

Largely residential, the structures on Beacon Hill showcase several different styles and are the work of a number of notable architects, such as Charles Bulfinch, Asher Benjamin, Solomon Willard, and Alexander Parris. While the Federal and Greek Revival styles were most popular during the first half of the 19th century and are the most predominant on the Hill, later examples of Italianate, Panel Brick, Egyptian Revival, Queen Anne, and American Gothic Revival styles can also be found. The later part of the 19th century also brought about a new form: the apartment building. Some early examples of adaptive reuse also occurred in Beacon Hill, with the conversion of many stables and carriage houses into loft spaces and studios. 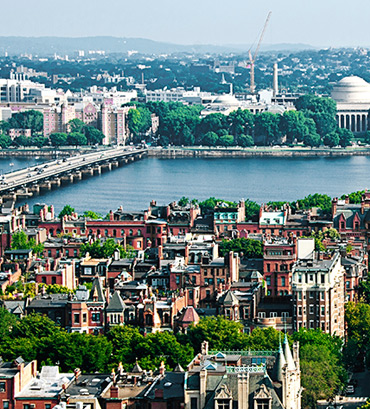 BACK BAY
Filled with historic brownstones and tree-lined streets, Boston's Back Bay is one of America's most desirable neighborhoods in which to live, and is home to many businesses, bars, and restaurants. Residents of Back Bay are able to easily enjoy a stroll down picturesque Commonwealth Avenue, a picnic in the Boston Public Garden and Commons, or shopping on Newbury Street. Back Bay is now the business and commerce center of New England, and is home to the two tallest buildings in the city of Boston, the Prudential Center and John Hancock Tower.

Housing in the neighborhood ranges from the classic Boston brick and Brownstone buildings along Beacon, Commonwealth Ave, and Marlborough to new luxury high-rise condo developments like the Clarendon. Back Bay is now home to some of the finest luxury homes and luxury rentals in the city.

Interestingly for such a beautiful neighborhood, as little as 160 years ago, Back Bay did not even exist. Back Bay was covered in swamp and marshlands, as it was a part of the Charles River. To form the land, the Massachusetts government commissioned Boston construction companies to dam the river and fill the area with land. The result; an 80 year building effort yielding one of the most famous neighborhoods in the country. 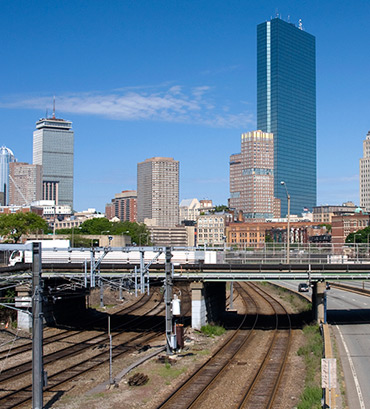 FENWAY
Best known for Fenway Park and the Boston Red Sox, the area commonly referred to at the Fenway includes both the Fenway and Kenmore Square areas. This area boasts many of the City's top cultural attractions, including the Museum of Fine Arts, Symphony Hall, and the Isabella Stewart Gardner Museum. Fenway/Kenmore is home to many educational institutions, including Boston Latin School (America's first public school), as well as many colleges and universities. Additionally, the Fenway is located adjacent to the Longwood Medical Area, which houses some of the best hospitals in the United States, including Beth Israel Deaconess, Boston Children's Hospital, Brigham and Women's, Dana Farber Cancer Institute, and the Joslin Diabetes center.

As a neighborhood, the Fenway is home to many students, as well as young professionals, who are drawn to the lively nightlife and easy access to the city. Recently, more luxury condo and apartment developments have been undertaken. The luxury developments have been driven by the area's amenities and access to the Back Bay Fens, the Charles River, and the rest of Boston. 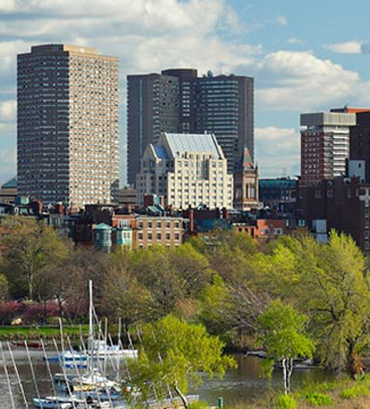 JAMAICA PLAIN
Jamaica Plain, or "JP" as the locals call it, is a classic "streetcar suburb" that has evolved into one of Boston's most diverse and dynamic neighborhoods. The ethnically diverse area is home to many Latinos, young families, and a growing gay and lesbian community. Hyde and Jackson Squares have significant Spanish-speaking populations. This blend of cultures is reflected in local businesses, such as the many different restaurants which line Centre Street, one of its main thoroughfares. Residents and visitors enjoy walking, biking, and running along Jamaica Pond situated on the Jamaicaway, part of Boston's Emerald Necklace. 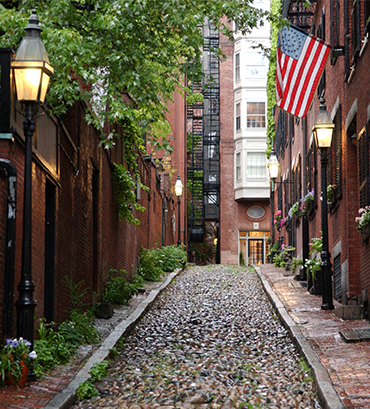 BEACON HILL
One of Boston's oldest communities, Beacon Hill gets its name from a beacon that once stood atop its hill to warn locals about foreign invasion. Approximately one square mile in size, Beacon Hill is bound by Beacon Street, Bowdoin Street, Cambridge Street and Storrow Drive. Its architecture and lay- out is reflective of old colonial Boston, consisting of brick row houses with beautiful doors, decorative iron work, brick sidewalks, narrow streets, and gas lamps. Beacon Hill is also home to the Massachusetts State House and America's first African Meeting House. Charles Street, the neighborhood's main thoroughfare, is lined with antique shops and restaurants. Beacon Hill has been home to many notable Americans, including Louisa May Alcott, Oliver Wendell Holmes, Daniel Webster, Robert Frost, Sylvia Plath, and Senator John Kerry. Largely residential, the structures on Beacon Hill showcase several different styles and are the work of a number of notable architects, such as Charles Bulfinch, Asher Benjamin, Solomon Willard, and Alexander Parris. While the Federal and Greek Revival styles were most popular during the first half of the 19th century and are the most predominant on the Hill, later examples of Italianate, Panel Brick, Egyptian Revival, Queen Anne, and American Gothic Revival styles can also be found. The later part of the 19th century also brought about a new form: the apartment building. Some early examples of adaptive reuse also occurred in Beacon Hill, with the conversion of many stables and carriage houses into loft spaces and studios. 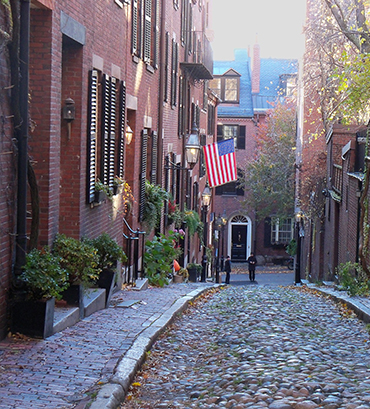 NORTH END
Home to American patriot Paul Revere, the North End is one of Boston's most historic neighborhoods. Traditionally a first stop for immigrants arriving in Boston, the North End is most well known as an enclave of Italian immigrants. Today the North End is populated by a mixture of Italian Americans and young professionals who are attracted to the neighborhood's tight-knit feel and access to downtown. Tourists come from near and far to sample authentic Italian cuisine, enjoy a cannoli or a cappuccino at Mike's or Modern, and explore its narrow streets. In recent years, a number of boutiques have opened in the North End specializing in everything from trendy clothing to jewelry. The North End also offers access to Boston's waterfront along Commercial Street. Residents and visitors can enjoy strolling and relaxing in the newly renovated Christopher Columbus Park, and during summer evenings the park is host to a performing arts series. 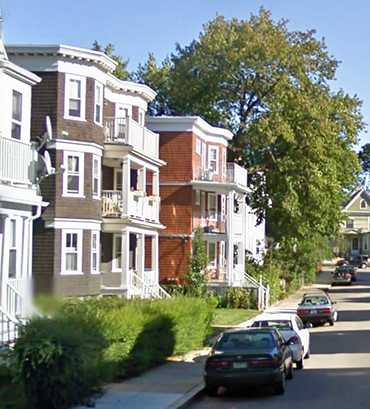 SOUTH BOSTON
Once a predominantly Irish Catholic community, in recent years South Boston has become increasingly desirable among young professionals and families who are attracted to the neighborhood's strong sense of community and quick access to downtown and public transportation. People from all over the city enjoy taking a stroll around Castle Island, a Revolutionary War-era fort and 22-acre park that is connected to the mainland. "Southie Pride" is on full display in March when city residents flock to the neighborhood to enjoy the annual South Boston St. Patrick's Day Parade. Today the breathtaking South Boston Waterfront is emerging as Boston's newest neighborhood. Already home to the Boston Convention and Exhibition Center, development on the Waterfront includes residential, office, retail, and hotel use. 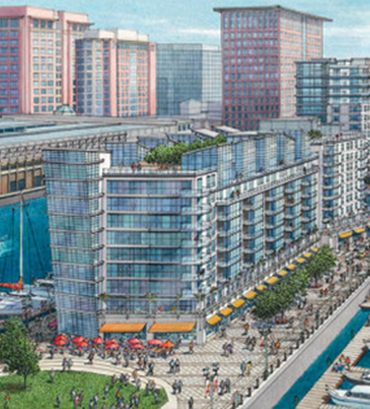 SEAPORT
Technically part of the South Boston neighborhood, the Seaport District has its own distinct neighborhood feel. One of Boston's hottest and trendiest neighborhoods, the Seaport boasts some of the best restaurants in the city; a beacon to the area's top chefs and restauranteurs. Boasting "over four restaurant seats for every home in the area", there is no lack of quality dining places to visit. Activities range from the ICA (Institute of Contemporary Art) to the Museum of Science to the Harpoon Brewery. With new residences built every day, the Seaport is a great home for families, singles, and couples alike. 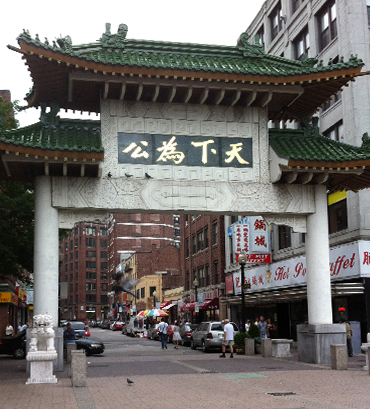 CHINA TOWN
Boston's Chinatown is the third largest Chinese neighborhood in the country. Located between the city's Financial District and Theater Disctrict, Chinatown is one of the most densely populated neighborhoods in Boston. Locals and tourists alike are drawn to the area's large selection of Asian restaurants and bakeries, where they can sample everything from dim sum to almond cookies. During the popular August Moon Festival, children carry brightly colored lanterns and revelers eat sweet cakes known as Moon Cakes, each containing a secret message. The Boston Chinatown Neighborhood Center, which opened in 2005, is a tremendous resource for the community, providing residents with English-language classes, childcare, and social and recreational opportunities.

Located between Chinatown, Downtown and South Station, in recent years the Leather District has emerged as a distinct Boston neighborhood. Made up of old leather factories transformed into residential and commercial uses, the Leather District boasts a historic appeal while offering 21-century amenities. Residents cherish the "loft living" options that characterize this community. Locals do not have to travel far to sample some great restaurants, cafés and shopping destinations. The Leather District also experienceS the splendor of the Rose Fitzgerald Kennedy Greenway. 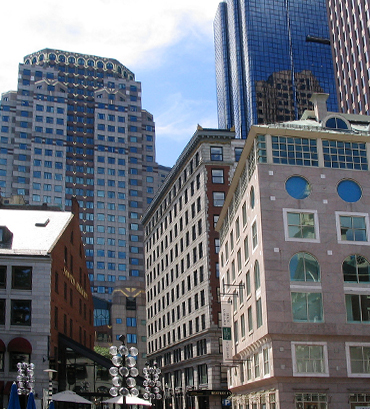 FINANCIAL DISTRICT
Long known as Boston's center of business and finance, the Financial District has in recent years seen a rebirth in residential development. The construction of the Rose Kennedy Greenway, after the completion of the Big Dig, created one of the largest newly created urban parks in the country. The addition of this 27 acre green space has been a primary driver of recent residential development in the area, as it has made the area even more family and pedestrian friendly. The new residential developments in the area have brought along with them a wide array of new restaurants and shops, in addition to the many shops and restaurants in the Historic Faneuil Hall area. The area is adjacent to Boston's rapidly emerging Seaport/Waterfront, the North End, and to the Downtown Crossing shopping area. As more and more individuals seek to live and work in close proximity, the Financial District will see more and more residential development in the coming years.
EXPLORE
Home
About
Contact
Privacy Policy
FIND US
476A Columbus Ave, Boston, MA 02118
CONTACT US
(p): 617-424-9500(f): 617-424-9600info@southendrealty.com
© South End Realty Group
Powered By DreamingCode